Home INFORMATION Historic announcements on ending corruption and black money by PM; Five hundred and one thousand rupee notes will no longer be legal tender from 09-11-2016

Historic announcements on ending corruption and black money by PM; Five hundred and one thousand rupee notes will no longer be legal tender from 09-11-2016


In a historical move that will add record strength in the fight against corruption, black money, money laundering, terrorism and financing of terrorists as well as counterfeit notes, the Government of India has decided that the five hundred and one thousand rupee notes will no longer be legal tender from midnight, 8th November 2016.

The Government has accepted the recommendations of the RBI to issue Two thousand rupee notes and new notes of Five hundred rupees will also be placed in circulation.

Notes of one hundred, fifty, twenty, ten, five, two and one rupee will remain legal tender and will remain unaffected by the decision today.

Prime Minister Shri Narendra Modi made these important announcements during a televised address to the nation on the evening of Tuesday 8th November 2016. He said that these decisions will fully protect the interests of honest and hard-working citizens of India and that those five hundred and one thousand rupee notes hoarded by anti-national and anti-social elements will become worthless pieces of paper. 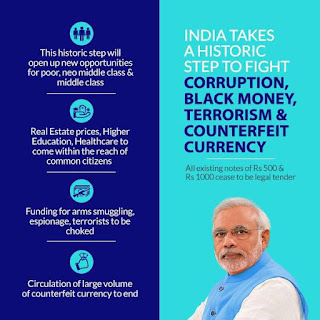 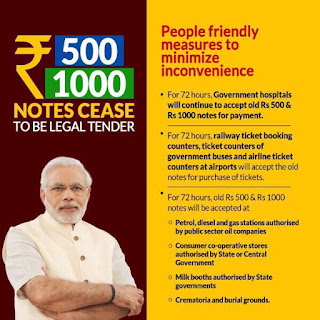 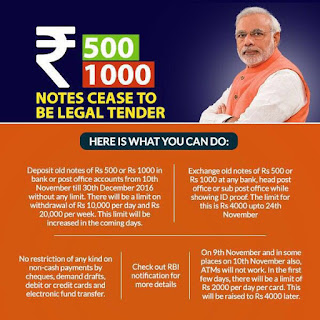 The Prime Minister said the steps taken by the Government would strengthen the hands of the common citizens in the fight against corruption, black money and counterfeit notes.

Fully sensitive to some of the difficulties the common citizens may face in the coming days, the Prime Minister has announced a series of steps that will help overcome the potential problems.

Persons holding old notes of five hundred or one thousand rupees can deposit these notes in bank or post offices from 10th November onwards till 30th December, the Prime Minister announced. There are also some limits placed on the withdrawals from ATMs and bank for the very short run.

Shri Modi emphasized that there is no restriction on any kind of non-cash payments by cheques, demand drafts, debit or credit cards and electronic fund transfer.

In his address the Prime Minister shared the insight into how the magnitude of cash in circulation is linked to inflation and how the inflation situation is worsened due to the cash deployed through corrupt means. The Prime Minister added that it adversely affects the poor and the neo-middle class people. He cited the example of the problems being faced by the honest citizens while buying houses.

The Prime Minister has time and again said that the Government is committed to ensure that the menace of black money is overcome. Over the past two and a half years of the NDA Government, he has walked the talk and led by example.

The very first decision of the Prime Minister led NDA government was the formation of a SIT on black money.

A law was passed in 2015 on disclosure of foreign bank accounts. In August 2016 strict rules were put in place to curtail benami transactions. During the same period a scheme to declare black money was introduced.

The efforts have borne fruit. Over the past two and a half years, more than Rs. 1.25 lakh crore of black money has been brought into the open.

Raising the issue of black money at the world stage

Prime Minister Narendra Modi has time and again raised the issue of black money at the global forum, including at important multilateral summits and in bilateral meetings with leaders.

Record growth in last two and a half years

The Prime Minister said that the efforts of the Government have led to India emerging as a bright spot in the global economy. India is a preferred destination for investment and India is also an easier place to do business in. Leading financial agencies have shared their optimism about India’s growth as well.

Combined with this, Indian enterprise and innovation has received a fillip due to the ‘Make in India’, ‘Start up India’ and ‘Stand up India’ initiatives that seek to celebrate enterprise, innovation and research in India.

The historic announcements made by the Prime Minister will add value to the already thriving efforts of the Central Government.

Share this with short URL: Get Short URL
INFORMATION