✔ moderator 15:06
The services of Delhi Metro will be partially curtailed on the 26th of January, 2018 (Republic Day) as part of the security arrangements for the Republic Day celebrations as per the instructions of Delhi Police. 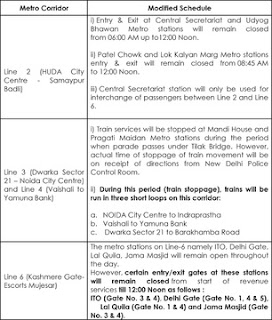 Beating Retreat Ceremony: On the 29th of January (Monday), on the occasion of Beating Retreat, Metro services at Central Secretariat and Udyog Bhawan Metro stations of Line 2 (HUDA City Centre – Samaypur Badli) will not be available from 02.00 PM to 06.30 PM. However, interchange of passengers from Line 2 to Line 6 (Kashmere Gate to Escorts Mujesar) and vice versa will be allowed at Central Secretariat Metro station during this period. Normal services at these stations will be restored at 6:30 PM.

PARKING: In addition, all Metro parking lots will remain closed from 06.00 AM on the 25th of January to 2.00 PM on the 26th of January, 2018. This step has also been taken as part of the security arrangements.

Share this with short URL: Get Short URL
INFORMATION